Proverbs 3:5
Trust in the LORD with all your heart, and do not lean on your own understanding.
As you can tell by the first post that went out with out any information we have been busy the last two weeks. We have had approximately .8″ of rain in the last seven days which has been perfect and expect a possible shower this afternoon. We have the Foxfire irrigation system charged and will charge the Players system as needed.  We are waiting on the new pumps to arrive which I would expect to have in the next few weeks. We still have the ability to water and the weather has been great but the night time lows are expected to rise next week by 8-10 degrees F. I finished spraying all the pre-emergents on May 2, 2016 which included a pass around the front 9 Foxfire course collars and approaches. We were also able to spray both range tees, and the driving range for dandelions and crabgrass preventer and a pass around the fairways as well. Luis and Jose have done an excellent job working with multiple various staff members getting the bunkers in shape. Also, the high school kids have been working after school as well on the Foxfire Traps. We will asses which traps to eliminate on Foxfire and which ones to add sand too. I have sand quotes and am waiting to hear back on quotes for a material handler, and also a spinner style topdresser so we can add sand to the greens more efficiently after we verticutt. We will need to also find 2 Billy Goat Vaccuumms which are lawn style sweepers to pick the chafe or “clippings” up after we verticutt, and a buffalo blower. Jim as done an excellent job and we may have the other rough unit running.  He was able to utilize one of the hydrostatic detent valve banks off of the scrap pile unit and convert the rocker arms and Pistons to retro fit the 4000 D. We did have a hose blow out on it yesterday after testing by the mulch bed by the shop. So that area will appear brown for a few weeks and some of Mrs. Graves Azaleas she planted may get some epinastical appearance from that happening nearby her newly planted shrubs. These are normal things that happen when utilizing aged equipment. 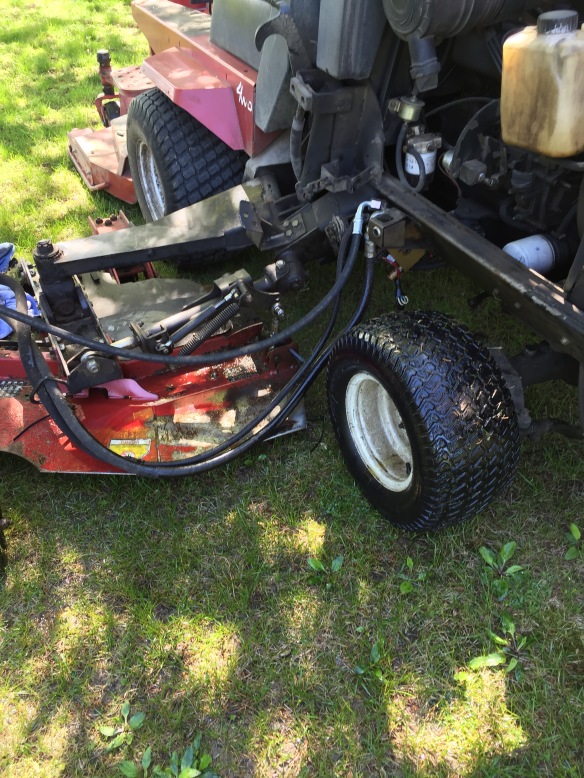 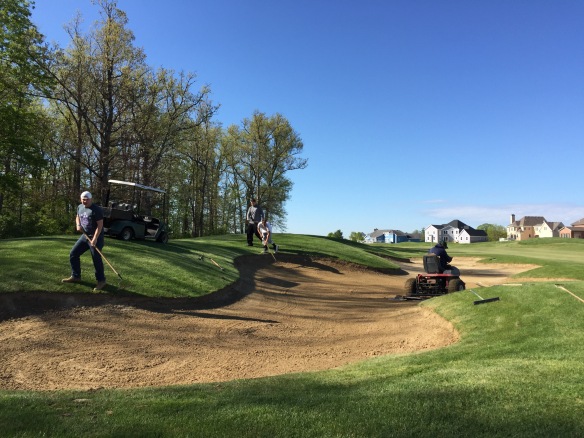 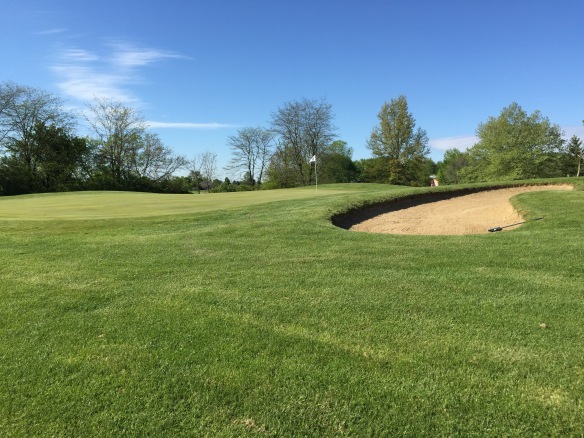 We are adding or reshaping 2 approach on Players Club and will continue to do this on Foxfire as well where it blends in and makes the playability more efficient, which will increase rounds and revenue. The area below to the right of the green will have an approach height cut similar to the area we have in front of 15 Players Green. 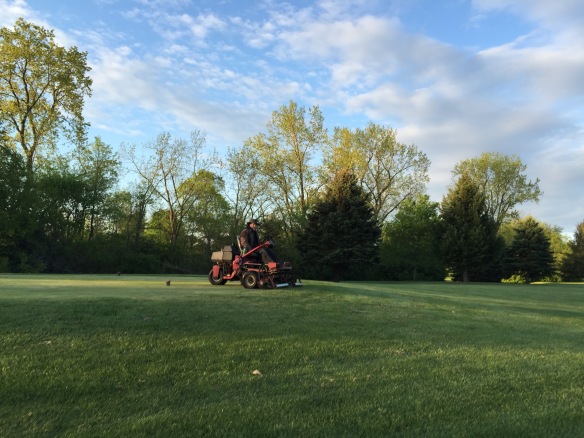 One Players below after & before photo.

One Foxfire before and after photo. 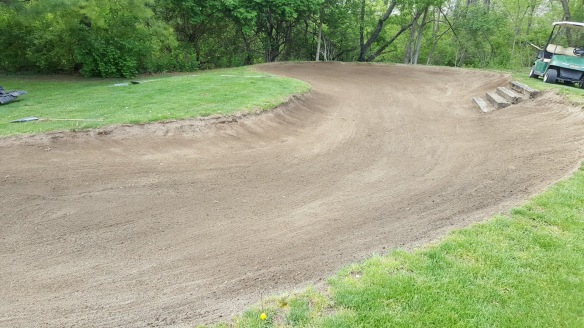 15 Players green side before and after

Nancy, Brad, Fred have kept up with the fairways and rough this past week on both courses. 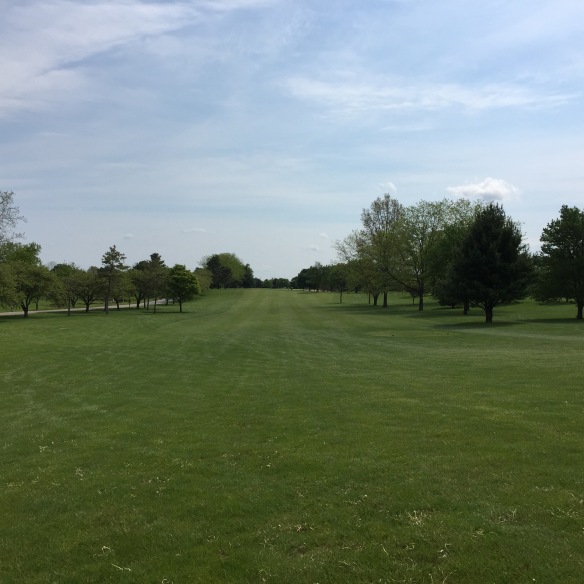 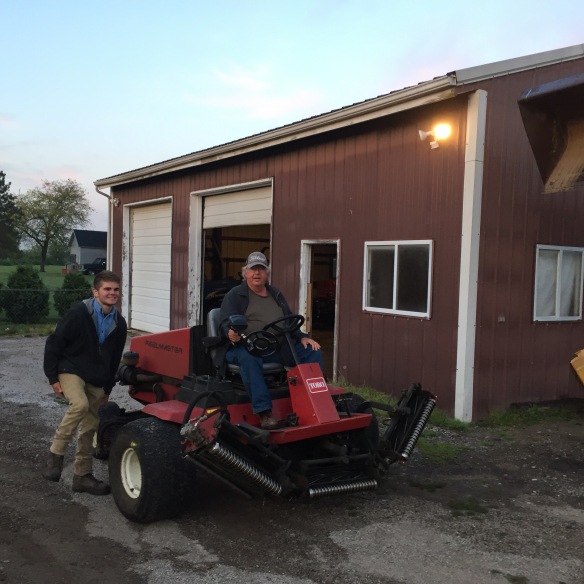 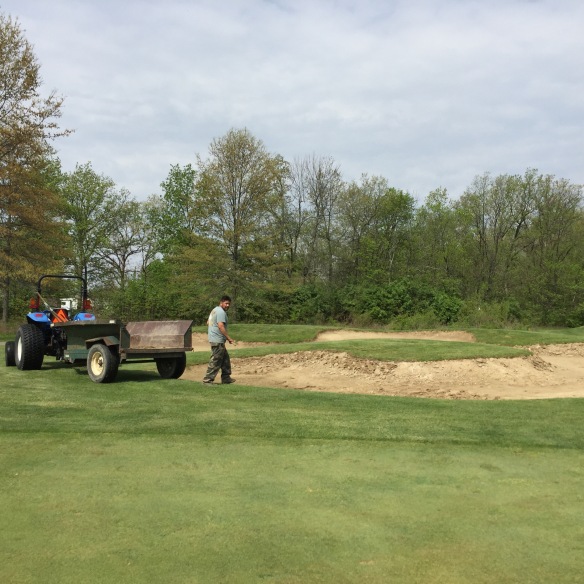 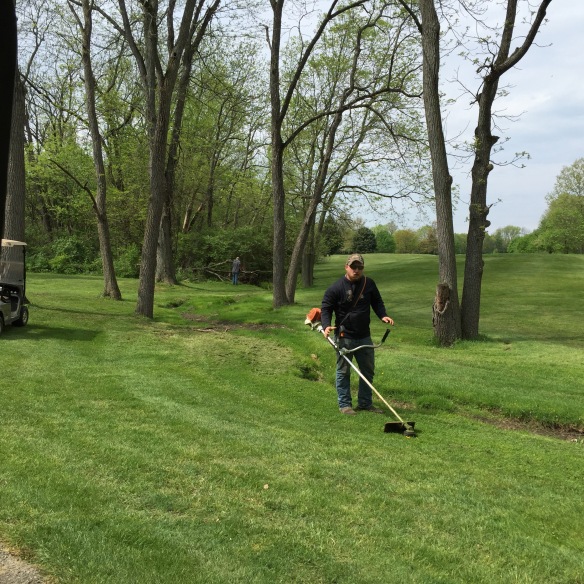 Tom, JR, Jim Mandrell, and McMillen playing #2 Players on Wednesday. Tom’s bunker shot spun back for the makeable par putt. Thank Brooks for the new monitor and Internet access now we can access the GCSAA and work email from the office. Occasionally, I’ll have a hotspot mifi from my other job which is a little faster but it is better than nothing. We used it the other day to locate the model number of the engines from our 16 year old tri-plexes that we will be replacing soon. This will save the company money and time in many areas.

Also, Elijah helped organize all the files and comprehends spreadsheets so we will be able to complete the equipment list with in the next few weeks for inventory and eventually set up a cost analysis for what parts are going on which machines when we order them. Most days are interesting on any golf course property but yesterday I thought the 4000 D Jim was working on fell on him, but that was not the issue at all. We had a skunk pass by him through the main bay and went in to the only corner of our other bay that has not gotten straightened out yet. You can barely see the critter but we did get him to leave.

Thank you all for your support and we will see you on the course. The new flags, and sticks are out and I am waiting on the new replacement cups due to a manufacturing issue with the Ferrell sticking inside the bottom of the new cups.