My father’s mother, a widow of a Reverend and a WWII Vetern turns 94 this month, and my parents have been married 17,532 days as of July 2, 2015. My brother and lawyer had his birthday July 3, 2015. This country needs more relationships like all of my grandparents, parents, aunts & uncles marriage. I believe one hundred percent that the decline and issues with our country starts with the Church and the family! Our Country needs its’ Spirit back! Our Constitution is being greatly altered and compromised by the current administration! Personally, I have had many family members serve, die, and defend this flag and the U.S. Constitution! Our Founding Fathers of the USA wrote the Constitution forever! It is as written, and not a “living breathing document” to be altered at the whim of any current elected official! If you want a Bible and a gun, carry one and don’t hide it!! Be proud to be a free American! There are no permits needed for your Bible or your Gun!  And 75 of the Darden’s and Nicks’ served and defended during the Cival War and American Revolution! Thank you all! Colonel Petrek, as always sir, this Flags for you! Let’s go golfing soon! I got my new clubs this week!  The Fourth of July starts here at the front gate of the plantation at 4:30 AM. Come see the show at Foxfire and see what God is doing and providing for many families!

Just after sunrise on 6 Players Club! 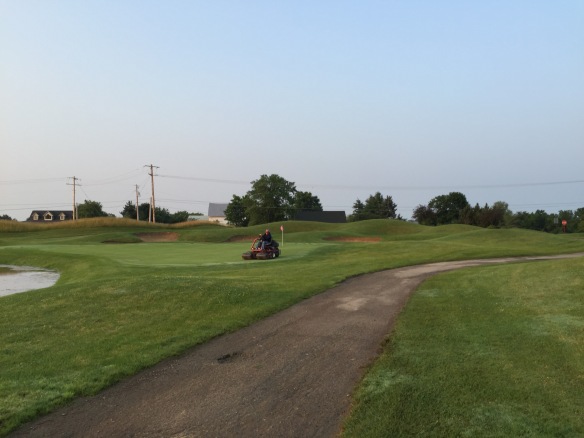 A Clogged drain on 5 Players unclogged this morning! 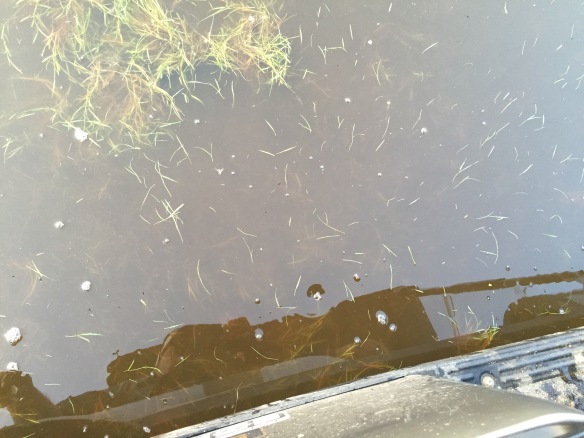 We have had over 9 inches of rain in June and .03″ last night. The disease pressure this season has been much greater than last summer! We are covered but have been batteling issues with our greens sprayer! We hope the new switches will correct any issues with that! We have replaced the pump, belts, and pressure regulator, but again this unit has over 6000 hours on it and will need replaced someday!

Our sand pro broke down today as well but even with only two utility carts operating and a rotating staff of 18 people for 36 holes both courses were prepared the best I have seen them in the last two years for this weekend. We had 3 guys hand rake all the green side bunkers today and all 39 greens were triplexed as well as the cups changed!

Pre tee time starts are normal for Foxfire Golf Club we accommodate all the members’ and guests what ever time they want to play. Steve  and his group play every Saturday at sunrise!

This view in the morning reminds me to be grateful for what we do have and not worry about what we do not have! 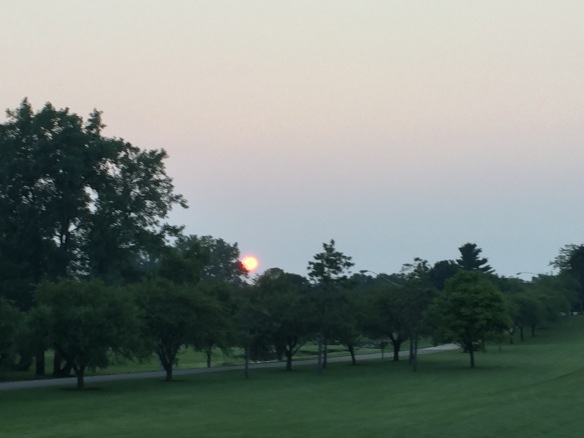 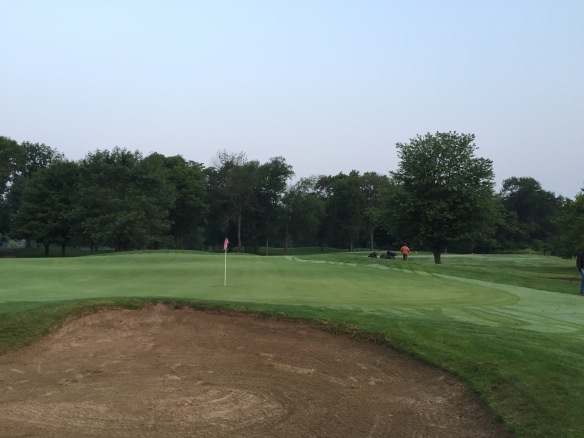 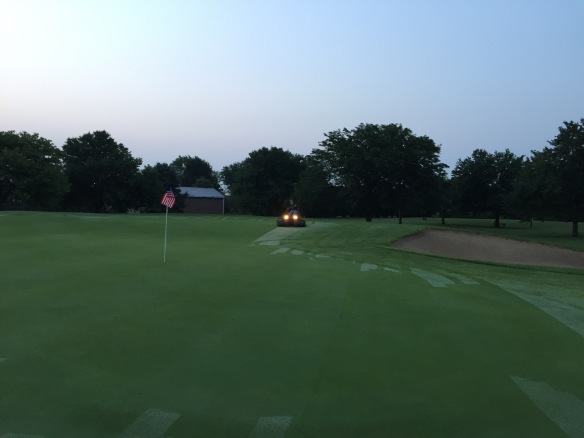 TJ mowed the Foxfire greens and Akron graduate Brady set the pins for the day! Luis and Elijah set up Players Club! Brad was able to mow all the fairways this week in between hydraulic leaks. And some of the wetter holes on Players Club were triplexed with the tee mowers.

Jim and I installed the new starter to the Massey Fergueson driving range antique tractor and I firmly believe the new starter blew the front head gasket out as it shot oil out the front of the engine block during its return. The great news is we do not have to change the oil in it but we will need to figure out what gasket or seal is leaking form the engine, but it starts now with out a hammer.  I did have to modify a housing bracket  to retro fit an after market starter! No that’s not why it leaking it was part of an L bracket that held the original starter in place and the new one was a little bigger with less room for that bracket which had the metric housing nut molded in to it from the factory. 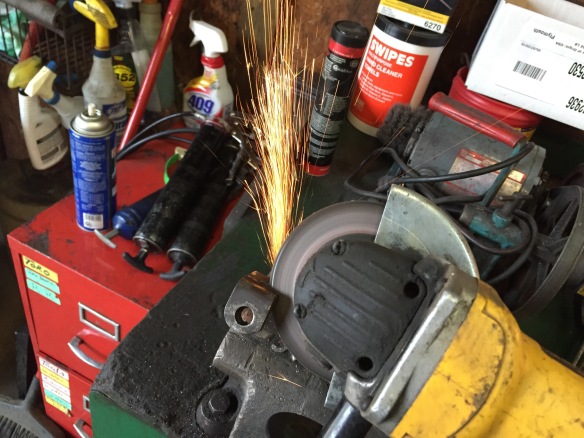 The hammer however is needed for the worm gear in the John Deere sand pro to knock back in place when it unwinds to far to actuate the rear rake lift mechanism. Training in progress! One whack at 3 mph puts the gear back in place. However, today’s issues were a slightly stuck throttle cable. 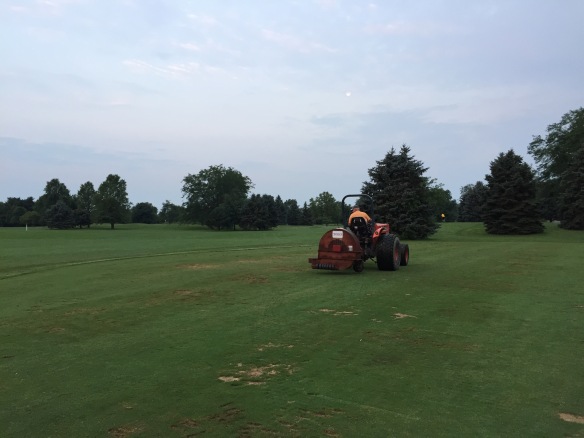 Brad and Chuck mowed the range tees yesterday and the primo is helping tremendously. The tenement on wheels is not cousin Eddie’s  it’s the owners tradition for the week of the fourth to go camping at the course!! No Chuck didn’t blow it over!

Thank you Chuck for your service and I am certain you will not get stuck in that new red truck!!!

We had a guest take out their frustration on 17 Foxfire on Thursday after an apparent missed put!! TV Golf from the U.S. Open doesn’t set a good example for regular folks who think it is okay to tear up a green.  This costs as much to repair as they paid for in a round of golf in turf and labor! 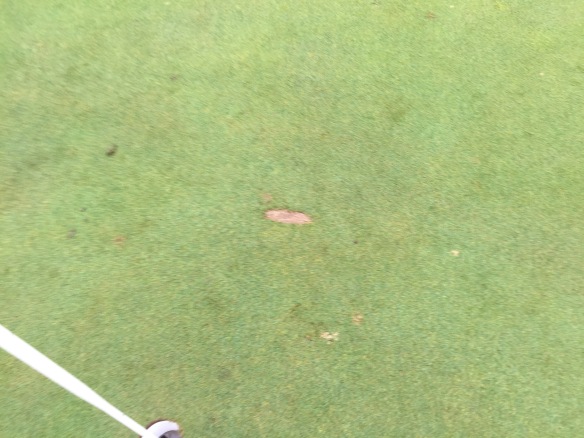 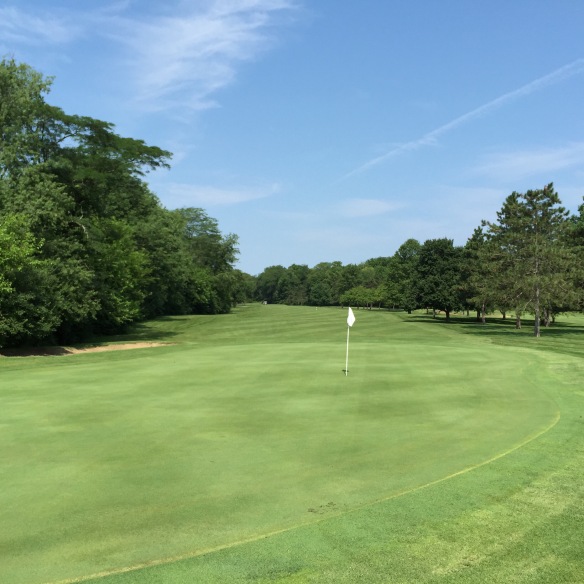 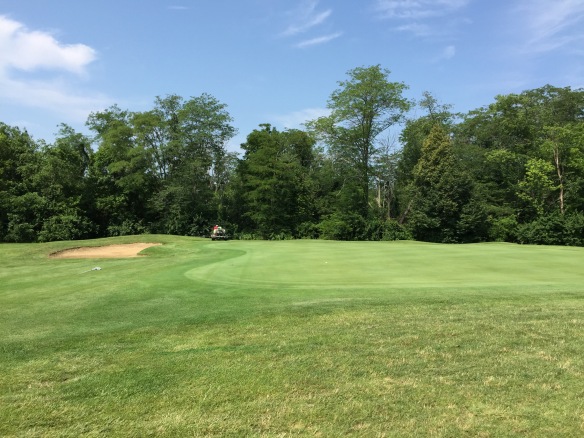 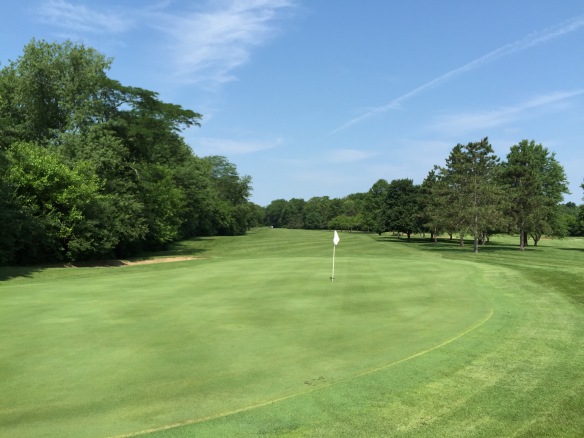 Detail worked continued earlier this week as we have 80 bunkers to maintain and improve along with 348 acres of Turfgrass. The 16,000ft^2 trap on 8 Players still has weeds due to the recent dessication enhancement application. We will remove the epinastical  weeds on Monday! 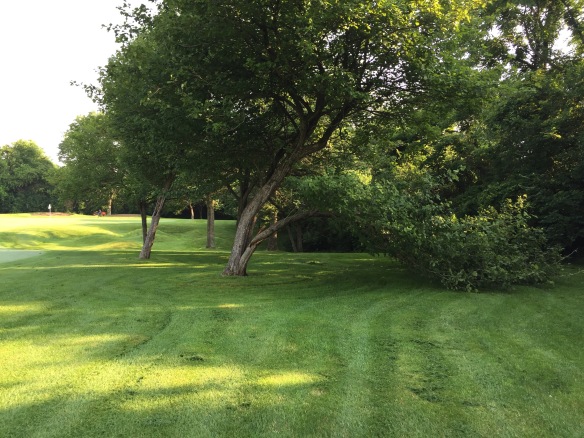 Half of this tree was taken out because it fell on our rough unit this week for some certain reason! All in all we had a great week of progress and look forward to repairing several irrigation leaks next week! 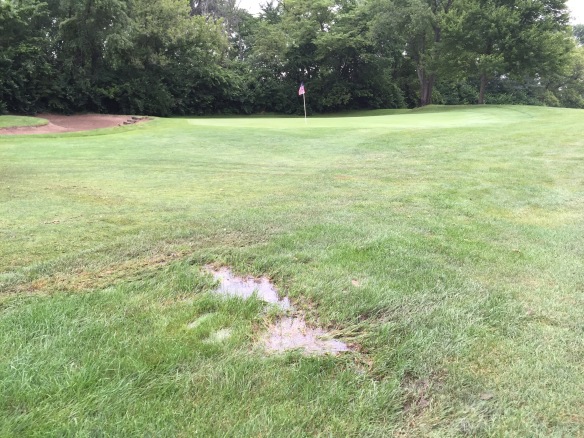 No clean up lap on Thursday! Leak on 14 Players Club. The “pump” has been off now for 8 days to save on power and wear since it is the only pump left we have for that golf course. 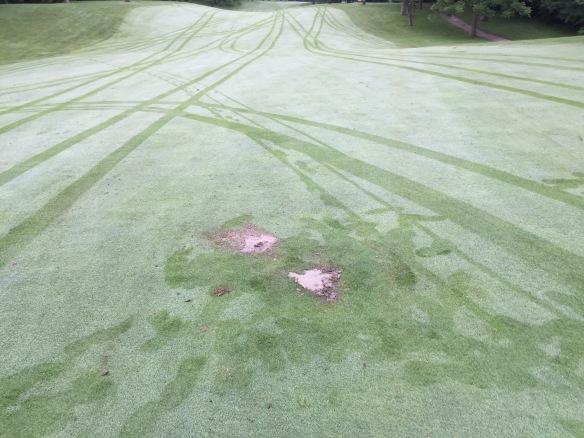 Hopefully, soon we can verticut and top dress greens! As always it is a pleasure to serve.
Darden